Gilbert Barnes and George Gauthier were the first Battle Point Association people to come to Blind River -in 1925.

Mr. Gauthier had been born at Algoma Mills and his family had owned a fleet of fishing boats near here. Later his family moved to the United States. George was Athletic director at Wesleyan University at Delaware, Ohio and Gilbert Barnes was an economics professor there. So the two men came to Blind River looking for a place to build a summer resort for members of the faculty.

The tourist business had not really begun in Blind River when they came to the town but the men talked to some of the businessmen in the town and of course they were interested since it would be good for business. Mr. White and Mr. Thompson were the first to take them up the blind River to Lake Duborne. The big bald rock of Battle Point caught" their eyes immediately . Every time they put their fishing lines in the water they pulled up a fish. This sold the two men on Duborne right away. The Americans purchased Battle Point and the adjacent land from Bill Burke.

Barnes and Gauthier set up an Association and leased the land to Wesleyan faculty members only and still the Methodist Association was strict about who got into it. 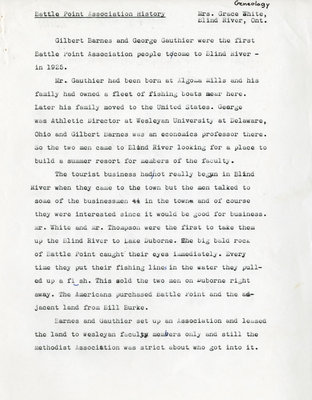