Ghosts, ghouls and goblins are draped inside and out of this popular home that is famous for its special decorations

ABOVE: The Labbe house, which is also decorated extensively at Christmas, is all decked out for Halloween

BELOW: Gloria Labbe stands in the front entrance of the home

BELOW LEFT: The hearth in the living room reveals some of the interior decorations.

Special to the Star

More than 400 trick or treaters are expected at 157 Cobden Street this coming Thursday evening. Most people would blanche at the thought, but not the folks who live at that address.

After all, Gloria and Vic Labbe bring it on themselves. They deck the place out until it's dripping with ghosts, ghouls, goblins. and countless other symbols of All Hallow's Eve.

After years of being a must-see on the Christmas lights circuit, the Labbe residence in Blind River is now in the forefront of the trend to decorate for Halloween as well.

"Ever since we could manage to spend a little bit of money we've been decorating for Christmas." Vic, a recently retired electrician, says. Gloria objects when he adds. "It' grew on us terribly."

"I don't think it's terrible," she interrupts, wanting to keep it dear that no one is really complaining, even though it is a lot of work and it does cost considerable money.

Vic quickly explains that he was using the word to express the way their efforts had snowballed over the years. The Christmas display has been 15 years in the making. Gloria estimates that their investment in Christmas decorations must be about $30,000.

It was about a decade ago, Gloria recalls, on their trips to Frankenmuth, Michigan, that they began noticing houses decorated for Halloween. As a wide selection of Halloween decorations began appearing in stores, first in Michigan, then later here, they began to expand their holiday decorating hobby to include Oct. 31.

Gloria figures that their investment in Halloween decorations now sits at around $5,000.

It has become a family tradition for their daughter Cheryl Moratz, and granddaughters, 11-year-oid Tegan and three-year-old Kyra to spend Thanksgiving weekend helping them put up the outdoor Halloween decorations.

Gloria does the indoor decorating and gets organized for the outdoor blitz in advance. Then when her helpers arrive, it is like a bucket brigade as the family passes everything from the basement storage area up the stairs and outside.

The yard awaits, like a stage waiting to be set. Vic strings up hundreds of lights, and everyone pitches in placing the scores of props. Every year the arrangement is different.

What's the pay back for all this expense and work? The delight in the faces of the little ones, say the couple.

Gloria thrills to the sight of "all the little faces stuck to this side of the road" when the school busses pass by.

Parents pull over as they drive by to give their kids a look. Vic notices how even as they pull away the kids are still soaking up the scene.

After seeing the interior of their home, where the hearth is a backdrop for an array of pumpkins, hay, corn stalks and autumn leaves; every table top sports orange and black candles: and witches, ghosts, bats and spiders dangle in every window and from every plant. One begins to understand that this is a hobby that has become a passion.

On Nov. 1 the Halloween decor will disappear and the Christmas things will come out. (The pair pack up their out of season things with meticulous care, knowing the extra effort now will pay off next fall.)

The Labbe's hundreds of Halloween lights pale in comparison to the thousands strung up for the Christmas season. Gloria takes a week off from work at the Royal Bank for the really big job of Christmas decorating.

Not willing to go public with their actual energy cost

Over the lengthy Christmas period, they admit it's steep — a hefty Christmas bonus for Ontario Hydro and a generous gift to the community.

In return, their home becomes a favorite stop for carolers, they have been recognized by the Chamber of Commerce and they receive numerous appreciative comments in their Christmas registry.

Problems with vandalism haw been minor and unlike some people in other communities, they have never received any complaints from neighbors about the spectacle or the commotion it generates.

As a matter of fact, when an early deluge of snow last December virtually buried their outdoor show, neighbors pitched in to help Vic dig out decorations. And when huge roadside snow banks were blocking the view for drive-by audiences on Christmas Eve, the town sent in their heavy equipment to remove the offending snow piles.

The Labbe's, though they enjoy the recognition they receive for their efforts, claim that sharing the limelight is even better.

They mention the lovely Christmas display at Art and Jean Nyman's on Highway 557 and the beautiful array created by the Bouchard clan north of the graveyard hill on Highway 555.

"The more the merrier, I wish more people would do it. I just love to go around to see other places," Gloria says, adding that she believes "it helps other people who don't have as much to enjoy Christmas and to get into the Christmas spirit."

There is no shortage of holiday spirit at this address. The property positively glows with good intentions every eve from Thanksgiving straight through to New Years.

Creator
Norlyn Purych, Author
Media Type
Text
Image
Item Type
Clippings
Description
This article describes the decorating efforts of Gloria and Vic Labbe at Thanksgiving and Christmas at their Blind River home inside and out. The couple tell how much they enjoy putting up the light displays that attract much attention and appreciation from children, neighbors and community members.
Notes
Three colored photos accompany this article showing both exterior and interior shots of the colorful Hallowe'en decorations displayed for the enjoyment of others. 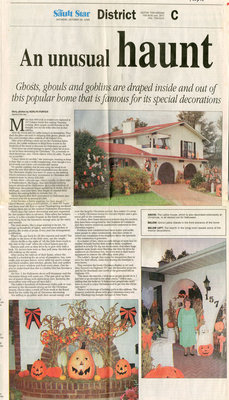