By MARGUERITE PIGEON of The Standard

BLIND RIVER - Two Blind River students have been selected to participate in an international Rotary exchange.

Chantal Venturi, 16, and Sarah Mobach, 17, were chosen from several candidates for the exchange, which will last about a year

Venturi, a grade 11 student at E.S Jeunesse Nord, is headed to southern Brazil, where she'll live with families who belong to the Rotary Club.

Mobach, a grade 11 student at W.C. Eaket, is destined for Hungary.

Neither of the girls knows yet which city or town she'll call home, so both say they're not exactly sure what to expect. But they agree it will be an unforgettable experience.

Venturi says she was thrilled when she finally got notice of her acceptance. "I was so happy, I was prancing around the house with my letter."

Mobach says she was interested in the exchange because she wants to learn a new language, and understand how others live.

"I wanted to see a different country, but not from a tourist point of view...I want to adapt to a culture," she says.

Venturi, like Mobach, says she's convinced her year abroad will be a success.

"It's an experience that I definitely will not forget," she says. "I've talked to other exchange students and they say nothing but good things about it."

Dave Marshall, who coordinates the student exchanges for the Blind River Rotary Club, says this attitude is exactly what got the

girls into the program.

The girls excellent school marks, community involvement, extracurricular activities and interest in world events all worked in their favour, he says.

The process of becoming an exchange student began back in September of 1994. After an initial interview by the Blind River Rotary Club, they travelled to Traverse City, Mich. for a more intensive weekend of screening.

Even their parents were subjected to scrutiny, all in the hopes of finding candidates who could handle living so far from home.

Mobach says her parents have supported her all the way

"They're excited (and) happy for me," she says, adding that they're also a little nervous about the trip. "(Sending) your daughter off for a whole year and not seeing her is kind of scary."

Venturi says her parents are similarly supportive and apprehensive. She says they've known of her interest in the program for a long time, since she's wanted to do it since she was in grade five.

Between now and their departure in August, both girls will attend several conferences where they will be prepared for the trip.

During their stay, they'll be expected to act as ambassadors for Canada, and will give talks on their home country.

Chantal Venturi is headed for Brazil on a Rotary exchange while Sarah Mobach, (inset) is going to Hungary.

Creator
Marguerite Pigeon, Author
Media Type
Text
Image
Item Type
Clippings
Description
This article concerns Chantal Venturi and Sarah Mobach, students from Blind River who were chosen to participate in the International Rotary Exchange Program. Details about the students, the exchange, destinations and preparation for their adventures were also included.

Notes
Chantal was destined for Brazil while Sarah was travelling to Hungary. 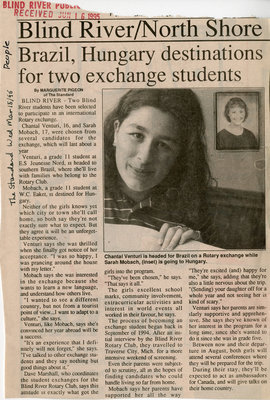