By JACQUELINE COLLINS For the Standard

BLIND RIVER - Ruth Christilaw, a former teacher and librarian at Blind River Public School, was recently awarded an Honorary Membership by the Federation of Women Teachers' Association of Ontario.

Christilaw received the award for outstanding service to education, the teaching profession and the Federation. Being one of eight women chosen to the award this year, Christilaw also has the distinction of being the first teacher from North Shore board to receive the FWTAO award.

Christilaw began her teaching career in York County and Lee-side, Ontario, where she taught grades one to eight. After marrying her husband Tom in her sixth year of teaching, she moved to Blind River and temporarily retired from teaching to raise her six children.

Fourteen years later, Christilaw felt it was time to return and began supply teaching for the Blind River Public School Board. Later, she started full-time teaching for the Board which was now named North Shore.

As a librarian, her desire to encourage others, both students and staff, to develop a love of reading, was shown in the displays she arranged. She also organized "book-talks" by inviting authors to come in and speak with students.

Within the FWTAO, Christilaw has served in many capacities at the local level - president; vice-president; representative for the Status and Goodwill Committee; Fall Conference secretary; and originator of the Christmas Tea for Retired Teachers.

Christilaw spends her retirement keeping active in the community - she was formerly a member of the Timber Village Museum Board, and presently volunteers at St. Joseph's Health Centre as well as performing activities with her church. She also manages to find time to travel and visit her six grandchildren. 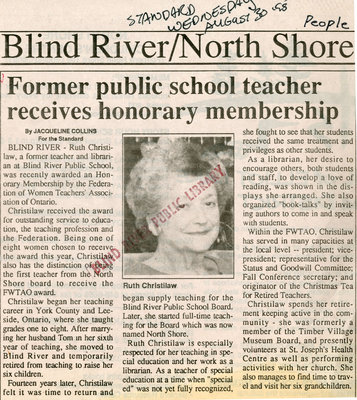