BLIND RIVER — The Blind River logging memorial, begun a year ago, is complete.

The last component, six bronze logs, were installed at the site, replacing real logs that were used as stand-ins until the metallic logs arrived.

Laura Brown Breevelt, the sculpture's designer, was on hand for the operation.

Brown Breevelt, a former Elliot Lake resident and who now lives in Quebec, said the logs couldn't be installed last year because she changed foundries. "The place I had selected in Atlanta wanted to produce pseudo bronze logs," she said. "They were a resin fiberglass with bronze powder. They would have looked very much like bronze but they wouldn't have had the durability. I went with the real bronze look and I'm pleased with the outcome."

Brown Breevelt switched foundries and had the bronze logs produced in Toronto.

The trick now will be to keep the memorial, located at the town's east end, clean.

Because of its close proximity to the Trans Canada Highway, Brown Breevelt says the sculpture, which has two bronze river drivers steering the logs and overshadowed by three copper trees, is subject to road elements.

"They get a lot of salt from the highway," she said. "That means more oxidation and that will accelerate the greening process of the men. To protect the men and keep them bronze looking longer, they'll have to be cleaned in the spring and fall and waxed, which is like polishing silverware."

Brown Breevelt said she was surprised the bronze loggers are turning green faster than she thought, but that can be directly attributed to the large quantity of spray from the highway hitting the memorial.

Brown Breevelt says the copper trees won't have to be cleaned of the salt because the intent is to get them to turn green over a shorter period of time as opposed to the loggers.

"But there again, they're turning green faster than I anticipated and they should be completely green in the next couple of years. They're dark brown now and I kind of like them that way."

Meanwhile, Brown Breevelt is getting name recognition because she's in the stages of finishing or beginning sculptures in other communities. She has just about finished a bronze sculpture in Timmins with a miner and his family as the theme and in July a children's theme bronze sculpture will be unveiled in Peterborough. Recently she was hired to design a recreation theme sculpture made of steel for Houston.

Creator
Rocco Frangione, Author
Media Type
Text
Image
Item Type
Clippings
Description
This newspaper article concerns the completion of the Blind River logging memorial with the installation of six bronze logs. The article goes on to include information about the manufacture of the sculpture, it's aging and the sculpture's designer, Laura Brown Breevelt.

Notes
A black and white photo of Laura Brown Breevelt posing with the sculpture accompanies the article. Ms. Breevelt was a former Elliot Lake resident. 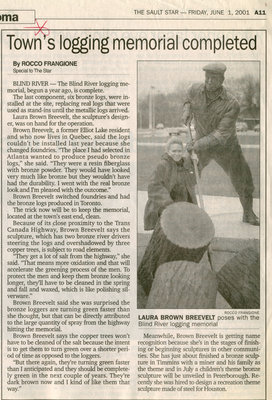