Lila Cyr was recently given the award by Northern Ontario Business in its fourth annual awards ceremony in Sudbury.

Cyr was one of two women to win the award; the other being Tracey Vigars of North Bay.

The award recognizes women who make positive change in their community and also contribute to the local economy's wealth and growth.

Cyr has been a town councilor in Blind River since 1982 and has also served as deputy mayor.

She's taken on numerous projects over the years and her latest would translate into a multi-million dollar project if it sees fruition.

Cyr wants to convert a 100-year-old lumber mill into a multi-purpose use building, which includes a youth centre, a privately run bowling alley and movie screens.

Meanwhile, Vigars was recognized for her community work, largely with Kiwanis related projects like the Kiwanis Music Festival in North Bay.


Mrs. Cyr's community activities and achievements are also outlined in the article while a black and white photo of Mrs. Cyr and two other award winners accompanies the article. 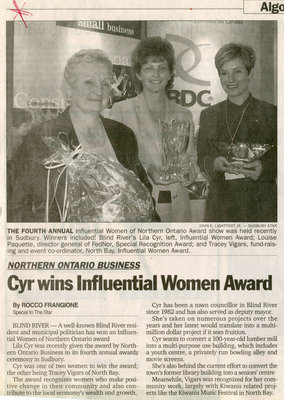