Mystery Question
Is Mr. Evans still involved with the Green Party?
[Please answer by clicking on the Comments tab]
Creator
Shannon Quesnel, Author
Media Type
Text
Image
Item Type
Documents
Description
This two-page article from the on-line Elliot Lake Standard concerns the new candidate for the Green Party for Algoma-Manitoulin-Kapuskasing. The article documents how the 18 year old candidate, Greg Evans, came to hold this position and provides other background information about him.

The new Green Party candidate for the next federal election, Blind River's Greg Evans, believes there will be a green seat in the House of Commons.

The 18-year-old recently became the Green Party's candidate for the federal riding of Algoma-Manitoulin-Kapuskasing (AMK).

The Wilfrid Laurier University student says he is confident about the Green Party's chances.

"I think this election, more than ever, the Green Party is a real party, not just a joke and not a wasted vote," explains Evans.

"This is the first election where the environment is the top issue. And I am pretty confident this election will see... a Green seat in Parliament.

Born in Newfoundland and raised in Blind River, Evans was a volunteer for the Green Party's last AMK federal election campaign and worked with then-candidate Sarah Hutchinson.

When rumours started surfacing about another federal election, Evans believed the Green Party needed a candidate for the AMK riding and he put his name in the hat. His was the only candidate who came forward for the party in AMK.

"I was actually acclaimed at the nomination meeting, as I was the only candidate there, which helps a little bit getting elected."

Evans is already planning with supporters in Blind River on how to handle a campaign and says he will be in the riding whenever an election is called.

"I would have to take off time school and do some correspondence courses and try to juggle that," he explains, adding he has no plans on dropping university, unless he gets elected.

He is currently studying for an honours degree in global studies, and recently helped found the Laurier Greens, a campus group affiliated with the Green Party of Canada.

He has the nod from his parents, which is a surprise.

"They are supportive of it. I didn't really expect them to be. Taking time off of school is never a popular thing with your parents."

Evan's mother, Mary, says, "it's wonderful" that her son is a candidate, and adds she was not surprised that he is this interested in politics.

He also learned he is not the only family member running for office. One of his aunts, Catherine Fife, is the New Democratic Party candidate for the Kitchener-Waterloo provincial riding.

— with files from The Sault Star 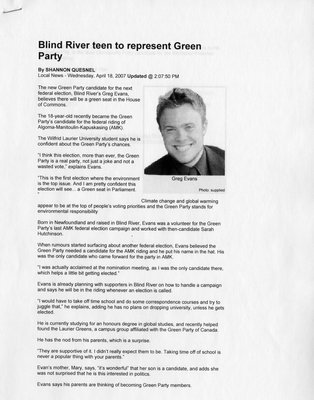