Special To The Star

BLIND RIVER - "We are not tourists who pass through the town and stop for a meal, a few gallons of gasoline or an overnight stop at a motel. We are summer residents of Blind River area."

In these words, A1 Rupp sums up 50 years of summer residency in the colony he founded on Rupp's Bay, at Lake Lauzon. The only years missed were the gas and food rationing days of the Second World War, which made it impossible to return.

Mr. and Mrs. Rupp consider their summer address has been more permanent than their winter address in the United States. Both are as keenly interested in their Blind River friends, the "doings" and welfare of the community, as they are those of their state-side home in Marietta, Ohio.

It was while Mr. Rupp was visiting a friend named Albert Suthers, at the Battle Point American Colony on Lake Duborne, that he decided to look around for a lake with good sandy beaches in the hope of starting another colony in this part of Northern Ontario.

In 1930, he found the spot he was searching for on a bay on beautiful Lake Lauzon, and proceeded to purchase 100 yards of frontage from a " homesteader" the late Paul Spooner. Later, with friend Newt Law, a mile-long strip fronting the bay was purchased.

The success of the colony founded by Mr. Rupp in what is now called Rupp's Bay speaks for itself in that some 25 cottages representing landowners from various states and provinces, including several Blind River families have been built there.

"Members even to the third and fourth generation of the early families still return, and many have done so for 30 years or more," said Mr. Rupp.

The past 50 years hold a multitude of memories for the Rupp's colony, ranging from growing families, the days of carrying water from the lake, oil lamps, road building, to the present indoor plumbing and electricity.

Perhaps the highlight of them all for Mr Rupp was the summer of 1931 when he met "his Jean" right on the beach in front of the cottage he was building. She arrived with a married couple who had come to visit him.

They were married the following year and have three boys and two girls (four of whom are married) and seven grandchildren, and no matter where the younger generation may reside, they try to come home to Lake Lauzon in the summer.

Mrs. Rupp said that all five had visited, though some at different times. The latest to arrive was David who just returned from Central Africa where he was employed with the American government, and after a holiday will be posted at the United Nations.

There is no place for boredom in the lives of the colony residents. In the early years there was building and improvements to cottages and property, fishing, hobbies, visiting, or just plain loafing on the beach in the sun, said Mr. Rupp.

Today, the younger folk have added such sports as water skiing, skin diving, sailing and other modern day activities which all add to their summer enjoyment, he said.

Outside, the Rupp family's love for their summer home is evident, not only in the "spic and span" appearance of the grounds, but also in the carefully preserved 50-year-old cottage to which a kitchen was added a few years later

The log-siding structure with its varnish sparkling in the sunshine overlooks the blue waters and sandy beach of Rupp's Bay, making it an' ideal spot for relaxation in beautiful surroundings.

Approximately a half-mile offshore lies Cranberry Island, also owned by Mr. Rupp. This small bit of nature has been left untouched except for the introduction of the tiny cabin barely visible in the surrounding greenery of the woodlands.

Pointing to a large rock out-thrust near the eastern extremity of the bay, Mr. Rupp chuckled, "That's called Pregnant Point, and if you could view the bulge from the other side you'd know what I mean."

Inside, the original cottage consists of a large dining-living area and one bedroom on the main floor. However, as the family increased, additional sleeping quarters were established in what Mr. Rupp termed "the loft," which extends approximately half the length of the building.

The balcony and stair railings to the upstairs are of small peeled and varnished logs in a criss-cross design which adds a pleasant rustic touch to the interior panelling.

Mrs. Rupp, referring to the time they panelled the living area said, "We sometimes regret closing in the notched two-by-four in the corner That was where the children first headed to be measured to see how much they had grown since the previous summer."

The esteem in which the family is held was aptly demonstrated when 125 attended the barbecue held in Mr. Rupp's honor. At that time, Treasurer Larry Shanahan, on behalf of the Lake Lauzon Association, presented Mr. Rupp with an engraved plaque commemorating his 50 years as a summer resident of Blind River

Perhaps the secret of Mr and Mrs. Rupp's gracious way of life may be found in the congenial atmosphere which permeates their home and outstanding hospitality extended to strangers crossing their threshold.

But certainly, the greatest contributor to that success can only be found in the outgoing love and understanding of their fellow man and the Northland to which they have faithfully returned for half a century.

Creator
Gladys Hornby, Author
Media Type
Text
Image
Item Type
Clippings
Description
This article celebrates the Rupp family's 50 years as summer residents of Blind River's Lake Lauzon. Information about Rupp's arrival, purchase of land and subsequent family summers here are included. Two black and white photos accompany the article. One shows a young granddaughter and a younger grandson sitting on the side of a boat while the second shows David Rupp holding a plaque that was presented to his father Al. 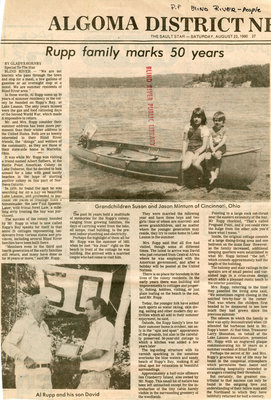