The doctor famous for mending soldiers in the Spanish Civil War and revered in China for his work with the communist forces under Mao Tse-tung, spent some of his teen years in Blind River, where his father was rector at the United Church.

BLIND RIVER - St. Andrews United Church is a prominent feature at the corner of Michigan and Centre Streets. It's a grand old church, and still very much in use today.

Built in 1902, it stands as a reminder of the community's earlier days, when horse-drawn buggies moved along Woodward Avenue, and the air was filled with the smell of wood smoke, and the squeals of the rip saws at the lumber mill.

The church was originally a Presbyterian congregation. The United Church of Canada, a union between the Presbyterian Church, Methodist and Congregational Church, was not officially formed until June 1925, although in Blind River, an "unofficial union" existed between Methodists and Presbyterians as early as 1917.

The land on which the church stands was donated by the Eddy Company, known also at various times as Michigan Lumber. Esso Fisher, the company manager, saw to it that the company donated much of the lumber.

Another parishioner, Jim McDonald, donated the chimney bricks, which he brought over from Manitoulin island on one of his old tug boats.

When the church was completed, the congregation consisted of 20 families.

The first minister in the new church, Reverend Pelletier, a recently converted Roman Catholic, was paid $169 a year

Fortunately, a Home Mission grant amounting to another $210 kept the cleric from starving to death.

He arrived with his wife Elizabeth Ann, an intelligent, strong-willed woman, whose fervent evangelism had converted her worldly and errant husband. Malcolm had renounced his planned business career and instead entered the clergy. Bethune would stay in Blind River until 1905.

Norman Henry would later be better known as Dr. Norman Bethune. During his remarkable career he would gain an international reputation for innovative surgical techniques and his development of the mobile blood transfusion service

that he first used on the battle fields of the Spanish Civil War.

But more than anything, Bethune is revered by the Chinese for his heroic work in China in the late 30's as a field surgeon and medical educator. It is said that a common Chinese battle cry was "Attack! Bethune is with us!"

Statues of Bethune have been erected throughout China. Parks and gardens have been named in his memory. In Gravenhurst, Bethune's birthplace, a former Presbyterian manse, was purchased by the federal government in 1973 and turned into Bethune Memorial House. Thousands of visitors tour the site annually which has been restored to look much as it did in 1890 when Bethune was born.

Why Rev. Bethune came to Blind River, one can only guess. What is known, is that he left an $800 a year posting to work in Blind River.

It's also known the minister had a habit of infuriating his congregation, and consequently was forced to move from town to town. At one posting he chastised a prominent parishioner who fell asleep during one of his sermons. He

evidently picked on the wrong person, and shortly after was asked to leave the charge.

The Bethune family home in Blind River was the former Baptist parsonage that had just been purchased for a Presbyterian manse. The present United Church manse was built in 1908.

Young Norman had a reputation for being a wanderer, and no doubt, he spent a lot of time wandering along the banks of the Blind River and tracking through the woods north of town. History does not credit Blind River, or the Blind River teachers, for helping shape Bethune during his early years. But the fact is, Bethune spent more of his youth in Blind River than in Gravenhurst.

In 1911, he worked as a volunteer teacher for Frontier College and taught in a lumber camp in Whitefish.

In 1903, the school consisted of three rooms - two rooms for elementary work - while the third room was the high school. In 1904, Norman Bethune and 17 others, attended the high school.

A new high school was later built on Michigan avenue, and when W.C. Eaket was completed, the high school was handed over to elementary school students. And it remains that, with some modifications, to this day.

The school Bethune attended was demolished in the early 70s. Long outliving its use, it was becoming a public hazard.

During the demolition, two items were saved from the school Norman Bethune attended. In a wooden housing in the hallway of the Blind River Public School is a large bell. Beside it sits a badly worn corner stone.

According to Al McLean, long time member of the board of education, it's the bell from the old school. The corner stone has a small pocket carved into it, and McLean suspects that it was a time capsule from 1903. McLean says that unfortunately, the contents were destroyed by moisture and temperature changes.

Roy Romaniuk, principal of the Blind River Public School, understands the importance of heritage and the positive effects it could have on his students.

He hopes that soon he can post a small plaque near the bell, explaining where it came from, and pointing to the fact that one of Canada's greatest humanitarians was once a student in the Blind River Public School.

Notes
The writer indicates that while Gravenhurst was Bethune's birthplace and has a Memorial there, Norman Bethune actually spent more of his youth in Blind River, attending both elementary and high school. 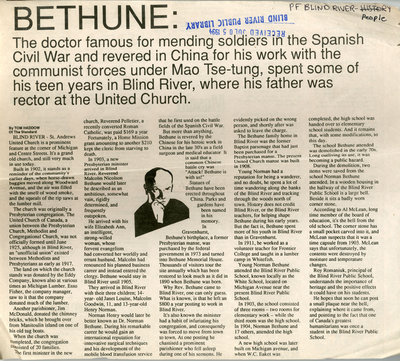