Editor's Note In this story Gladys Hornby captures the warm and caring attitude conveyed by an unusual man, Dr James Dolan. Dr. Dolan died in North Bay just before Christmas. The Sentinel decided to publish this article to inform its readers of the work he was doing and as a tribute to the man.

BLIND RIVER - "Clinical Hypnosis as induced by a qualified doctor psychiatrist, psychologist or dentist, can prove a beneficial adjunct to medicine "

In these words. Dr James Dolan affirmed his beliefs in hypnosis from results gained over the years in helping to alleviate or cure many of the physical and emotional problems which daily harass mankind

Dr Dolan. who practiced here for seven and one-half years as well as having earned his degree in medicine was a full member of the American Society of Clinical Hypnosis.

"The Unit will deal solely with psychopaths sent from the criminal courts. Its a real challenge for to date there is no reliable evidence of any positive treatment available for these people " he said "and I'm really looking forward to the work as part of the patient's treatment involves the use of hypnosis."

He explained that "a psychopath usually possesses a warm nature is a good talker and mixes well in society The big problem is - they also lack moral conscience therefore feel no guilt they likewise repeatedly appear in the courts on what may be termed minor offences (theft), but in committing the more serious crime of murder are generally considered as unfit to stand trial "

"This, we hope is where forensic psychiatry should prove an aid to justice as well as to the psychopaths themselves," he said.

In relating experiences and results of the use of hypnosis in his practice, Dr Dolan also exploded a few antiquated theories or beliefs that hypnosis is a handmaiden of the occult - not everyone can be hypnotized - or the scary possibility that one may never awaken from a hypnotic trance "Clinical hypnosis has nothing whatsoever to do with the occult, nor should it ever be used as a form of stage entertainment," he emphasized.

He pointed out that being hypnotized by a clinician is similar to daydreaming, for one is well aware of what is going on in the light trance usually induced.

"The only difference is that daydreaming is self-induced whereas the clinical trance is artificially induced for medicinal purposes, and is characterized by an increased acceptance of the doctor's positive suggestions. This in turn helps the patient to help himself through subsequent use and power of his own mind " he advised

As to the "Can't be hypnotized" belief he explained "Given time a qualified clinician can induce a trance in most people This has been proven through the successful induction of the schizophrenic a person suffering from severe psychotic disorders illusions conflicting emotions. personality deterioration or complete withdrawal from the world around them"

In practice Dr Dolan used hypnosis for smoking, drinking and weight problems, to ease the feelings of childbirth pain, migraines, asthma through psychosomatic illnesses to minor surgery anaesthesia and many other ailments.

"However, the only problem here is that - induced anaesthesia may take up to 30 minutes to attain the desired depth of trance, whereas the same state may be accomplished by drugs within a period of two or three minutes," he said.

Stressing the importance that a patient must always be given a thorough medical examination to assure that an illness isn't organic in nature, he cited the common problem of bedwetting and the procedure he used.

"First I test the child for any kidney or bladder malfunctions, then if further examination divulges that the cause of the bedwetting may be emotional in nature at the parents request or permission the youngster is placed in a light trance," he said.

"During this trance I offer positive suggestions which subsequently the child uses to enable his own mind to take over and control his bodily functions, thus eliminating the bedwetting problem." said the doctor

Speaking of methods of induction he advised when he first started the practice of hypnosis he used both voice and a blue light (to hold the patient's visual attention) but later used only his voice to induce a trance.

"There is no definite procedure because personalities of individuals vary a great deal For instance using the same method, wording if you like, and the same length of time one person might drop into a light trance while another will go in to a deep one." he stated

He felt that the oldtime beliefs, thus fears over hypnosis, plus the fact it has been used as a form of entertainment has had a deterrent effect on its acceptance in the field of legitimate medicine

Dr Dolan believed that only a small minority of Canadian doctors currently use hypnosis in their practices, but thought its acceptance may "gain weight" and eventually come into its own through the work to be done at the Ontario Hospital Forensic Psychiatry Unit, the American Society of Clinical Hypnosis, and the increased interest shown in attendance at the world-wide and smaller area conferences held on the subject, many of which he attended

In spite of these odds, the doctor courageously stood by his convictions saying, "I've used hypnosis where applicable, I know it works in the treatment of human ailments, so surely one day soon it will be allowed to assume its rightful place in the field of medicine "

Dr James Dolan, a soft-spoken Irishman with a delightful sense of humor and a dedicated physician, proved he had attained and retained one of man's greatest accomplishments — the human touch — when he said. "While machines are helpful in diagnosing illnesses, and modern medicines work minor miracles, I'll always believe that even more important is human contact, and showing that you care "

Mystery Question
Did Dr. Dolan die in 1901, 1981 or another date (full date was cut off)?
[Please answer by clicking on the Comments tab]
Creator
Gladys Hornby, Author
Media Type
Text
Newspaper
Item Type
Clippings
Description
This is a photocopy of an article that was printed in the Sentinel newspaper just after the death of Dr. Dolan to inform readers about the man and his medical use of hypnosis.

Notes
Dr. Dolan practiced medicine for seven and a half years in Blind River before moving to North Bay to work in the new Forensic Psychiatry Unit at the Ontario Hospital there. He died within a year of that move. 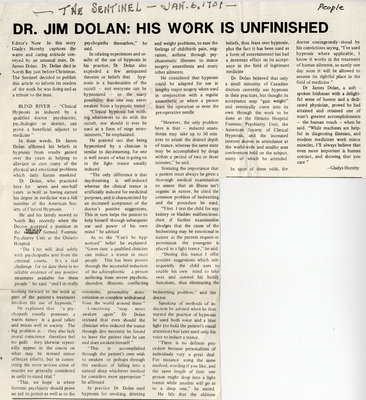