A fellowship working together to help others is how Larry Shanahan sees the Blind River Lions Club.

With a laugh: "It's the first organization I paid to get in, paid to stay in, all to help others. And it was worth it." For nearly 60 years, the Blind River Lions Club has been behind a lot of good things.

Whether it was fund raising for medical equipment, planning baseball tournaments or building a memorial to loggers, these tasks were par for the course for Blind River's Lions.

The club's motto is We Serve, so prospective Lions better be sure they are committed volunteers with strong streaks of community activism.

Life as a Lion has changed a lot since the Blind River club began in 1953.

The first Lions Club meetings were at the Riverside Tavern. Shanahan can still recall the faces of the old Lions, such as charter member Red Kennedy, then-president Roy Cavanagh, -John Menard ana Johnny Berthelot. The latter member was even younger than Shanahan. Shanahan was only 24 when he signed up.

In 1957, most of the 90 members were in their 30s and many were still employed, i.e., not retired. Shanahan worked for Canada Post. Besides the Lions Club, the Kinsmen and the Royal Canadian Legion were two other groups who attracted volunteers, The groups have shared resources several times over the years for this and that project.

Unlike the Legion and other clubs though, the Blind River Lions have never had their own building.

Shanahan says there was talk, and a fundraiser was started, but the closest they got was building a park. Besides, Shanahan says his pride' wanted to save their fund raising efforts for worthy causes.

"We looked at it with the point of view that the money we were raising.,. was raised in the area to help people. Building a place would not help people."

Shanahan says it was the Lions work, both its local efforts and its international campaigns that attracted him From 1917, the Lions have been bringing sight to the world's poor-sighted or blind, through the collection of glasses, canes and. more recently, the training and purchases of seeing-eye dogs.

He says the local club raised funds for many activities. In Blind River, the Lions raised money, steel and stone for the Northern Ontario Logging Memorial and the Lions Friendship Arch. These two monuments stand outside the Timber Village Museum.

In Blind River, Shanahan remembers the Lions cleaned up highway roadsides, helped bring in an extra nine holes to the Huron Pines golf course and were behind a minor baseball league. Shanahan himself was the first president of the minor leaguers and there was about 40 youth at the time. Years later, there were about 650 young players all looking for a crack at bat.

The local Lions also lit up Town Park with lights and were behind buying steel numbers to be nailed unto many of Blind River's house's.

They even raised money for a hospital operating table, the same table that Shanahan found himself on after suffering a minor head injury,

Then, in the 1980s the Blind River Lions raised $44,000 to buy cancer treatment equipment for Sudbury's Laurentian Hospital.

Continued of page A12

Photo Caption: Joan Shanahan and Betty Peterson made history in Blind River, when they were the tirst women inducted into the local Lions Club, in 1987. From left is then-Lions president Ron Hammond. Shanahan, Peterson and then-Lions secretary Don McCoy.

"I told them I was going to bring women into the club whether they liked it or not. And they still voted me in."

Creator
Shannon Quesnel, Author
Media Type
Text
Image
Item Type
Clippings
Description
The Blind River Lions Club saw its inception in 1953 and has consistently done great work for not only the local community but also for worldwide destinations. They have provided for glasses, seeing eye dogs, supported minor baseball, lit up the Town Park and helped with the Loggers Memorial. 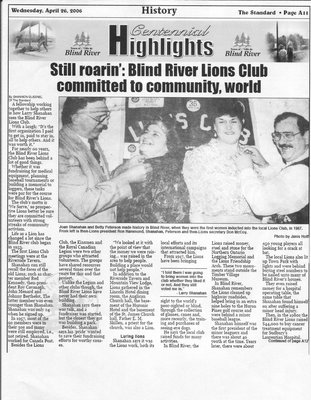