1906 Incorporation Of Blind River Was Rocky

In the early years of the last century, the community of Blind River was looking for more control over its destiny.

The year 1906 was an important one, as it sought to become an incorporated town.

Blind River struggled for years to reach this goal, but the large lumber interests were against the idea.

For decades, the lumber businesses were largely responsible for the community's growth.

Many residents lived in houses built by the companies.

These companies also handled certain services that would be considered municipal responsibilities.

That did not deter the town leaders. They were looking to take on more responsibility and become a self-governing entity, fully in charge of municipal services.

The town's first election was held in 1907. This incorporation did not come easily however.

The arguing between businessman and councilman came to a head in May 1900, the year that saw the creation of Ontario Hydro and the San Francisco Earthquake.

Back in Blind River, the community was a beehive. The whistle of trains was competing with the clangs of hammering blacksmiths and the buzzing of the sawmill.

This is the world of Charles Lediett, a self-employed builder in Blind River. Charles was in his early 20s in 1900 and was a self-made man. He is also the grandfather of Darcy Barson-Lediett, a Blind River historian.

Barson-Lediett grew up in Blind River, but left in 1908 for school. He spent 20 years teaching engineering at a North Bav college.

Many years later, he began researching Blind Rivers history by going through the archives ot The Sault Star, The Globe and Mail and anything else he could get his hands on.

He probably would have read actual town records and minutes of council meetings had they existed.

Many of the town s records were destroyed in a fire that consumed the then - town hall in 1952. It was reported, a lightning bolt hitting the bell tower sparked the blaze, Barson-Lediett says the town hall vault was open as well.

Since he began his research, he and his wife have transcribed a small book about 1900. He says it is simply a transcription of how Blind River was portrayed in The Sault Star. The book is available at Blind River's Timber Milage Museum.

Through his research was with old newspapers, he says there is a lot to learn by reading between the lines.

' You try to separate the speculation from fact and sort of get a sense of what the community was like.'

Barson-Lediett says from references from The Sault Star, the population of Blind River in 1000 was roughly 2,500 to 3,000.

Most of the people were cutting the logs in the bush, sending them down the river or working with them at the sawmill.

Aside from the lumber mill, there were many other businesses.

There were even jewelry stores frequented by the wives of well-to-do mill managers and others who could afford such luxuries.

Blind River was split between the employees and those who paid than.

"You can't call it an economical tier system, but you had the workers and you had the owners, and I think there was quite a separation between the two," Barson-Lediett says.

Many of the permanent workers had been there for years, such as the Native bands, or traveled from southern Ontario and Quebec.

And many of the North Shore's mills existed because the Ontario government did not allow raw logs to leave the province. The wood had to be milled on the North Shore.

There were musical numbers, comedy acts and plays.

Barson-Lediett thinks there was even a place called the Casino Opera House, although, he suspects it was a casino in name only. All things change however.

Before incorporation, a council led the community of Blind River.

It was similar to organized townships of today, with a reeve instead of a mayor and councilors representing different town wards.

Incorporation meant tighter control over the town's growth and maybe the creation of a better taxation system.

"I am going off the top of my head there,' he says. 'But, without a strong council and planning... a lot of the communities were helter-skelter in their growth,"

In 1904, there was an application made by the elected representatives of the day, to have the town incorporated.

From a Globe and Mail article, dated June 4, 1904 a provincial official left left southern Ontario for Blind River to investigate the incorporation application.

' So, a movement began with the council of the day. The desire to become a town was evident," Barson-Lediett explains.

"Now, in later reading, it was stated, the primary mining company, the lumber company, was in opposition to that. But in the final days in 1905, they had withdrawn their opposition and the application went through."

As to why the lumber business opposed the idea, Barson-Lediett can only speculate.

' In the early days, the logging company had a lot of control over the town, in terms of separating it into lots and ownership. They may have seen some of their economic base eroded.

'And the Eddy Brothers lumber company, they provided a lot of good housing for a lot of their mill employees.,, providing them with heat, electricity and street lighting.

"And I think, an application to have the town incorporated may have been perceived by some of them as a threat to their control over that.

"It's a little hard to read between the lines, but with my familiarity with municipal politics, anything can go.

"If you develop a subdivision and have to give it over to the town, it could be a threat,"

Still the powers-that-be accepted the change in government.

For years after there was much co-operation between the lumber industry that gave birth to the town and the Blind River's town council.

Photo Caption: (Right) Two Blind River hotels on the comer of Woodward and Causley Avenues in 1906.

Creator
Shannon Quesnel, Author
Media Type
Text
Image
Item Type
Clippings
Description
Blind River became an incorporated Town in 1906 against the wishes of some of the lumber companies with the first Mayor being Thomas Craig. This article gives a snapshot view of the early days of the Town. 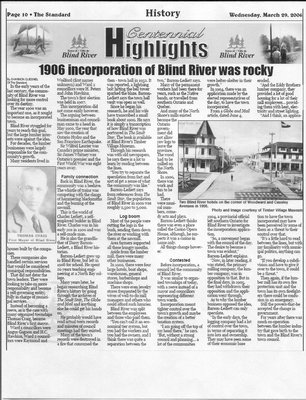