By SHANNON QUESNEL For the Standard

A fistful of wood - Childhood memories of lively, lumber town

Mixing lumber mill workers, loggers and miners in Blind River in the 1950s made for a rough and tumble town on many a Saturday night.

Blind River was as close to a frontier town as one could find in the 1950s.

It was like Dodge City, says Larry Folz, owner of R-Way Autoparts and son of former mill worker, Roy Folz.

'In the hey day, when Elliot Lake opened up in the early 1950s, you not only had the loggers here, you also had the miners'

With no town to live in, the miners needed somewhere to rest their heads.

So, on Saturdays we used to go and park the car downtown and watch the hotel fights spill out from the hotel, onto the sidewalks, with blood and guts everywhere.

And this was early afternoon.

You would sit in the car, and you had the windows rolled up and the doors locked,' Larry explains.

"You wouldn't go out there," warns Larry. He adds he was 10 years old at the time.

And sometimes the fights were so bad, the police would drive up in a large box truck.

"Yes sir, they used to round them up and load them in there, all weekend.

"Unbelievable. This was like the Wild West or the Klondike."

Not all of Larry's lumber year memories were as violent.

Before the lumber mill closed in 1909, life in Blind River was quick and fun.

As an adult, working at the mill or at a bush camp meant a hard day, but it also meant a steady pay cheque.

As a child, Blind River meant living in a place full of interesting people. Larry says even though his father worked at the mill in the early 1940s, he did not get the chance to hear about the mill from him.

"And I was just a young boy then, just five years old.'

Larry says he still remembers visiting his father, and the men he worked with such as Ed Savard, Peter Boyer, Paul McCoy Elmer Jensen and Omer Bordeleau.

"We lived just west of the mill, on Colonization Road, and my brothers and I used to bring his lunch to him,"

The mill was an awesome sight to Larry back then.

Standing in the back of his shop, he pulls out an aerial photo of the working mill and the town behind it.

"I can't recall how tall the piles were, but they had to be upwards of 20 feet in the air.

"And as you walked into the mill yard, in the summer time, the wood would just mesmerize you with that smell.

"It just sort of enveloped you. And it permeated the whole community."

"When he was a little older. Larry says he remembers huge ships pulling up to collect wood near what is now the Blind River marina.

"These huge cargo freighters would come in and it would take a week to load them.

"That's how much lumber there was."

"When he was eight years old he and other children would fish between the logs floating in huge wooden circles, known as log booms.

"Those were the days if you didn't have a worm on the hook, you could use a piece of grass, gum or paper and catch fish. Honest to God. it was unbelievable."

And in what would drive modern mothers crazy. Larry says children would walk across the logs and drop their lines between the floating logs.

He says they were not supposed to be out there, but they were.

"And we used to do it on the river drive, on the Mississagi River."

He says the pickerel fishing there was excellent. You just had to be careful.'

Back at the mill, from 8 a.m. to 5 p.m. crews, or gangs, stacked piles of white pine, jack pine and spruce.

First the lumber carrier would drop off a load of planks.

The two men at the bottom would feed the wood onto the conveyor belt, and then two men up top would take the wood off the belt and stack it.

"And they actually turned out, I believe, to be the highest paid manual workers for the sawmill at that time."

He explains, that some workers were paid by the board.

"And the more boards they piled the more pay they got.'

That was a lot of cash in those days, says Larry

"Believe it or not, that was probably double what other mill workers would have, gotten, simply because you had the incentive to produce a lot."

Roy also loaded boxcars and during the mill's off-season, he was in the bush camps, helping to cut and haul the trees.

Larry says for time off, the men ate their lunches at the mill site and the only vacation they had was when the rivers and lakes froze over.

How long the freeze lasted Lam- says he cannot recall, but he remembers when the town would fill up with men.

Larry says later in his life, he followed in his father's footsteps and worked at the mill during the summer.

Mill technology had changed a lot since the days when his father stacked wood.

At one point the Blind River lumber mill employed about 375 workers. Peter Boyer, Ed Savard, Pat Deschamps and Roy Folz were just some of them.

Creator
Shannon Quesnel, Author
Media Type
Text
Image
Item Type
Clippings
Description
This is a colorful description of the Town of Blind River in its heyday when logging and mining were king. It it is a lively tale of by gone days that is worth a read. 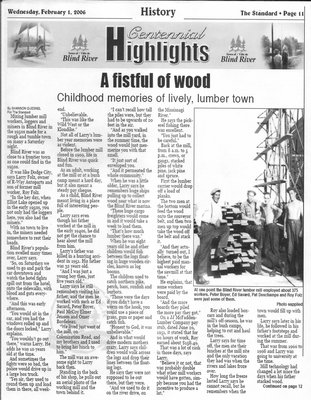