This is the second part of a two-part story.

It wasn't very much. It wasn't big money, that I can tell you, ' Horton says, calling $300 a month an average wage.

Usually, there would be two officers on duty during the day and two at night. At 12 a.m. one officer would go home, leaving one on duty.

This schedule ensured officers got at least two days off, in case they needed one day to be in court to give testimony. On those days, officers get overtime pay.

As for his training, Horton was to go to an Ontario Provincial Police college, near Aylmer, but the school was unavailable at the time.

Morin says he was able to attend the police college.

Horton's training, however, had to be done on the job.

"We handled just about everything," he says, chuckling, from driving out to accidents to handing out traffic

"Domestic was the biggest problem," he says.

If they stopped a car, to give a speeding ticket or for another reason, the officers would use the car radio, or radiophone, to call the nearest OPP office for information.

In a small town such as Blind River, both men say they had to ticket the people they knew as well as friends.

'There is always someone who is a friend or someone who will challenge you," says Horton.

"If they were speeding or pulled a stop sign, I gave them a ticket. That was my job,"

Morin says it was tough, but that was it.

"It's just like working in the mill or working for the newspaper."

Anyone they arrested was held at the police station. In 1967, it was located under Blind River's town hall, where Blind River's Public Library now sits, on Woodward Avenue.

n says the station was not very big, having only three or four cells and an office room about seven metres by seven metres. Morin and Horton say they never had to draw their firearms while on duty in Blind River.

About the only time they would draw their guns was to practice shooting.

Firearm training was more rustic compared to modern weapon training. Instead of an indoor shooting range. Blind River police officers took their handguns to places like gravel pits to practice.

Horton says during his two years he never was called to the scene of a murder.

When Blind River's police department closed in 1969, the lumber mill that once employed hundreds also shut down. People were out of work and those who could, found other jobs, either in town or somewhere else.

Horton says he was the only one in his family to become a police officer and he does not regret losing his position.

'I was not disappointed at all," he says.

After the police department he worked for Ontario Hydro as a groundsman, installing large steel power towers.

He says he does not miss being a police officer.

"Nope. Never. It's a thankless job and you can't please everybody."

Many a time citizens would complain to the police about problems the force could do nothing about.

This is not to say the police were not liked in Blind River, they were insists Horton.

Morin says it was a prestigious job at one time, but the job of being a policeman has changed.

I wouldn't do it now. Those guys who are doing it now, I tip my hat to them, because it just gets worse."

Horton also believes residents would like to see more police in town, instead of watching them zip by on the highway.

"To me the town hasn`t got the protection that it used to have back in them days, because you had police right in town and you didn't have to wait for anybody to come.

"I am not knocking the OPP - it's not their fault - but, it is the way it is. A different (kind) of policing these days."

Correction: The order and names in last week`s story were incorrect. This is the correct information. Starting from the back left is Blind River police officers Claude Monroe and Richard Horton. Starting from front left is Bill Reinhardt, (unknown) and Art Ambeault.

Creator
Shannon Quesnel, Author
Media Type
Text
Image
Item Type
Clippings
Description
This is a continuation of the previous article. Part 2 discusses the hours the officers worked, and the history of one officer in particular. 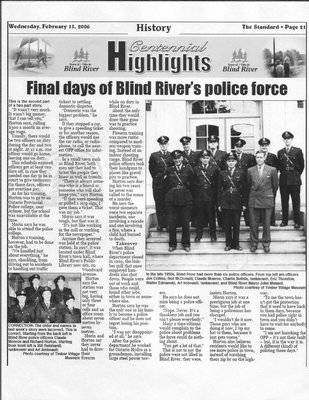