History The Standard • Page B9

By SHANNON QUESNEL For The Standard

Before 1909, Blind River had its own police force. From 1907 to 1969, an officer walked the beat, by himself, armed with nothing but his handgun and his knowledge of the community.

In the department's final years, officers Richard 'Dickie' Horton and Wayne Morin, along with fellow policemen, protected and served their town.

The constables responded to domestic disputes, fires, emergencies, as well as be called to crime scenes. They sat in court on their day off to give testimony in cases.

For two years, Horton and Morin manned the thin blue line. They might have done it for longer, but in 1969, the OPP took over the duty of protecting the town. Instead of absorbing the town's police into its ranks, as they later would in Elliot Lake, the province's police force decided to stick to its own.

'They didn't want any of us in those days. They wanted to train everybody their own way I guess," says Horton.

He says OPP staff interviewed all the Blind River police officers, but they had excuses for everybody they did not want.

All of Blind River's lost their jobs. For some, that meant finding work elsewhere. For others, it meant getting a job at another municipal police force.

Horton, who had owned an Esso gas station before becoming a police officer at the age of 22. got a job with Ontario Hydro. He still lives in Blind River.

Morin decided he wanted to continue to be a police officer and the 23-year-old left town to work at a detachment in Espanola, and later in Marathon. He is now back in Espanola.

Both men remember the brief time they spent in a Blind River police officer's uniform.

It had a dark blue coat with a leather belt around the waist and a leather strap that went diagonally down the chest from the right shoulder.

Strapped at the hip was a 32-calibre Smith and Wesson revolver and each officer carried extra shells in his belt. Each man carried a pair of handcuffs and what the officers sometimes called a bean sack, which acted as a billy club or truncheon.

It had small pellets inside, it was about six inches long with a string that was held in the hand and it was really hard." says Horton.

On the front of their hats was the badge. On their dark blue pants was a thin red stripe going down the side. In winter, the officers wore a thicker version of the dark blue coat.

They only had one police car, says Morin, a light blue, unmodified 1968 Chevy four-door, with a siren and a flashing red bubble light fixed to the top.

Besides the mechanical differences, modem police cruisers also carried a shotgun. Horton says in 1907, the officers only had their pistols strapped to their belts.

And instead of their own police garage, whenever it needed repairs the police car was taken to a local service station that used to stand near where the Tim Horton's building is now.

For 24 hours a day, Blind River policemen', in those days, drove or walked the length of the town's limits.

On Friday nights, it would be two men in the cruiser and one officer pounding the beat, the latter a sight not often seen these days in Blind River, says Horton.

"We used to walk the streets quite a bit, right up around the main street."

Becoming a police officer Horton says he was asked to join by some of the officers, men he knew from his school days.

"They needed another officer and quite a few of them were in my age group, so they approached me and I went."

When he took the job, Horton sounded very matter-of-fact about it. To him it was not the fulfillment of a boyhood dream. "It was a job."

Morin says much the same thing.

Work was five days on with two days off, and it paid about S150 every two weeks.

This is the first part of a two-part story. Part two will in the Feb. 15 edition of The Standard.

Former Blind River policeman Richard Dickie' Horton is pictured at top left. He and Bill Reinhardt (bottom left) are some of the former officers left from Blind River's municipal police force. When the OPP came to town in 1969 to take over the areas policing duties, the same year the town's lumber mill closed, the province's police force decided to not hire any of the town's policemen. They all lost their jobs. The rest of the officers could not be identified.

"If they were speeding or pulled a stop sign, I gave them a ticket," says former policeman Richard "Dickie"

Horton about catching friends who were speeding.

Creator
Shannon Quesnel, Author
Media Type
Text
Image
Item Type
Clippings
Description
Prior to 1969 Blind River had its own police force and this article discusses what type of duties the officers carried out and how things have changed over the years. 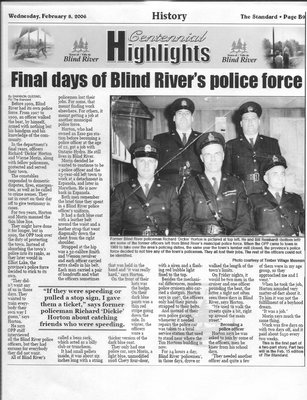