Full Text
The Origins of Bread and Cheddar
By Jim Windle

SIX NATIONS - Six Nations opens its arms to its neighbours this week during the annual Community Awareness Week of activities and fun. The weeklong celebration coincides with Monday's Bread and Cheese Day, known better off-reserve as Victoria Day.

Bread and Cheese Day is an annual "gathering of the Nations" as it were, as Six Nations families from across Turtle Island come home to get reacquainted with friends and relatives. The population at Ohsweken usually quadruples that day with a fair and the annual Six Nations Arrows Express lacrosse game Monday afternoon at the Iroquois Lacrosse Arena.

Queen Victoria started the tradition of giving gifts to each member of "Her Majesty's Faithful Allies", the Haudenosaunee (aka Six Nations), in both the American Revolution and the War of 1812. Initially the gift was in the form of blankets.

The practice stopped upon the death of the Queen in 1901. But after the forced take over of the traditional government by the RCMP in 1924, the Dominion of Canada, through the newly imposed Elected Band Council, started the practice again as an act of public relations, but with a twist. Rather than blankets, the gift became a token gift of a loaf of fresh bread and a block of cheese.

In more recent years, as a cost cutting measure, the amount of bread and cheese given each community member was reduced, but as far as the people of Six Nations who still celebrate that day are concerned, it's really not as much about the bread and cheese as it is a recognition of the relationship that exists between the British Crown and the Haudenosaunee, and it has become the social event of the year.

Community Awareness Week, which begins Wednesday, May 14th and runs until Wednesday May 21st, is more of a celebration of today's Six Nations community, its people, its businesses, its services and its sports teams.

The neighbouring communities are invited to come see and experience who Six Nations is as a community and to help celebrate our joint history and relationship together.

For locals Community Awareness is also a time to promote and gather information about the many programs and services that positively impact them. But, like Bread and Cheese Day, it is also a time to visit friends and relatives, play a few games and have a few laughs. 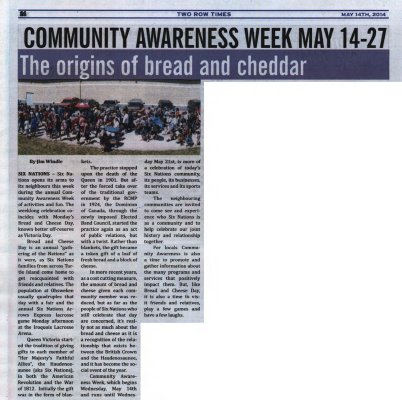